no topic?
no topic?

Summer Newsletter - What Makes You You? 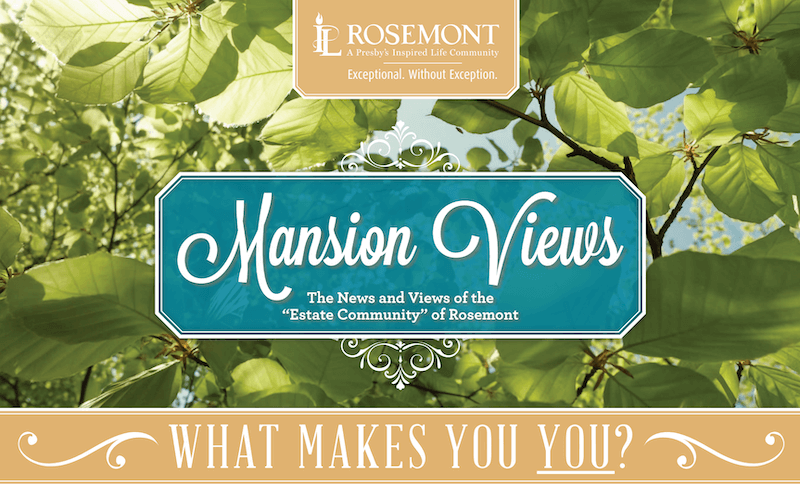 Why are there artists and writers? What makes one person an introvert and another an extrovert? What cosmic wheel of fortune determines the athlete, the scientist and the salesman in the family? How much is written in one’s
DNA, and how much is influenced by one’s environment? The “nature vs. nurture” debate has fascinated and frustrated for a long time. Meanwhile, most individuals have a sense of the formative experiences that made lasting impressions, along with new and ongoing factors that continue to influence preferences, decisions and personality. Resident Jane Collins sees the world
through an artist’s eye. Reflecting on a lifelong love of nature and color,
she describes a striking memory of  beloved vacation home. “It started
as a kid, at an old Victorian house we rented on Cape May Point,” she says. “In the early mornings, my sister and I would lie there on our sand-ridden army cots and look up into the turret, which was lined with  tained glass, and we’d wait for the sun to shine through. It made the most beautiful blocks of color.” From that time on, Jane’s path has been influenced by her appreciation for beauty in nature and color. For two years, she studied at the Academy of Fine Arts, where she met her husband. “We left to earn a  living,” she says. “We weren’t ready to be starving artists.” Following that, she took up positions at the University of Pennsylvania Hospital, TV Guide
and Wyeth Laboratories. But Jane never lost her love of visual artistry. “Vermeer is a favorite,” she says. “Especially his portraits — the lighting fascinates me.”

Rosemont Business Manager April Handy says her family’s influence shaped her identity with generosity and compassion and taught her to embrace each day. “Tomorrow is not promised,” she says. “The things we need to say to people should be said.” That philosophy accounts for April’s approach to celebrating special days, from birthdays and anniversaries to proms and more. “I love planning events,” she says. “Occasions — even small ones — need to be celebrated.” She brings that love for embracing each day to the people around her, from the Rosemont front desk concierge team she oversees to the residents and team members lucky enough to receive one of her famous gift baskets at an event. Community has always been important to my family,” she says, “and I love sharing that with others.”

New to their cottage on Rosemont’s estate grounds, Joan and Paris Sterrett each describe themselves as high-energy types who like to get things done. For Joan, organizing is both a strength and a way of life. She recalls preparing to move to Rosemont, when she used green tape to mark everything that was to be transported. “The movers joked that I had ‘CDO,’”
she laughs, “which is just like OCD, except in alphabetical order!” Paris has a love for being outdoors — which he traces back to time spent helping in his grandfather’s gardens — and a love for being with people. That extroverted trait, he says, comes from his parents. His mother was generous with her time, volunteering at the library, church and other areas in the
community, and his father served as Director of a community center in Providence, Rhode Island. “My father loved being ith people,” Paris says. “I’m an extension of his personality.” Jane continues to pursue visions
of beauty in nature and color. When she came to Rosemont, she made it a priority to have a view of the outdoors, similar to that of her previous address. “In Chesterbrook, my condo faced a secluded, wooded area,” she
says. “I wanted to make sure I’d still be able to have those views of nature.” She was pleased with the view Rosemont was able to provide. “I love my balcony,” she says. “I’ve f illed it with plants, and I take lots of photographs.”

She’s found fresh creative potential in photography, as well as modern technology, having shifted from painting with a brush to creating with a computer. “I find images on Pinterest that I like and then alter them with a paint program.” She also enjoys taking in the beauty of her balcony, still seeking out the distinctive colors of early morning, capturing photographs as
the light plays across her many plants and the trees beyond. “I knew I’d like it here,” she says, “but I didn’t know I’d love it!” Paris has combined his love of being outdoors with his passion for keeping busy. In addition to his significant volunteer work with the Middle Atlantic Blind Golf Association (see this issue’s “Behind the Scenes”), he provides landscaping services to people in the Main Line area. “I call it ‘POGS,’” he says with a grin. “That stands for ‘Paris’s Obsessive Gardening Service.’”

Rosemont Executive Director Marina Hacking has a passion for gardening, which creates rich common ground — literally — with many Rosemont residents. Known as “The Orchid Lady,” due to her particular expertise, she recently had the opportunity to put her skills to good use. When Rosemont
resident and frequent traveler Rita Bocher took off on her latest excursion, she entrusted her prized orchid to Marina’s care. “Once upon a time, that might have made me a little nervous,” Marina says. “But now I can just enjoy keeping it healthy and happy for Rita.” Drawing from the lessons of her youth helps April shape her environment today. “My grandmother was the matriarch,” she says, “and I’ve taken on that role in my family and in the
community.” She brings that dependable, caring spirit to the Rosemont community. “Even the smallest thing can make a world of difference — a little joy, a smile.”