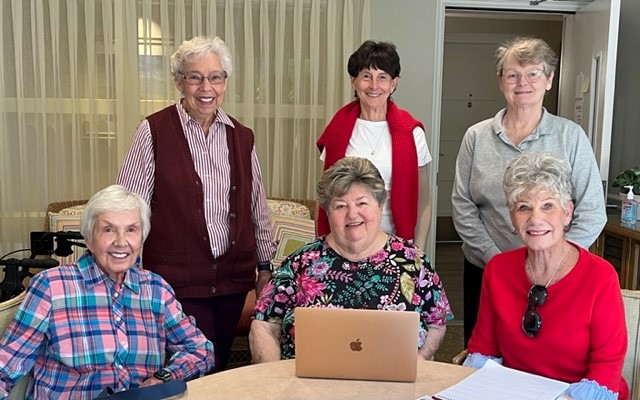 November 1, 2021 -- Concerned Seniors Making a Difference (CSMAD), a resident-led advocacy and educational group at White Sands La Jolla, was formed five years ago to educate the community on issues including climate change, immigration, homelessness, racial justice, reproductive rights and other issues affecting the community and world.

“This is a very rewarding group,” said 81-year-old Carolyn Shadle, a White Sands resident for 13 years and a founding member of the group. “We share concerns – and, look for ways that we can do something about them.”

In 2020, CSMAD teamed up with a nonpartisan voting group to encourage people nationwide to cast their ballots in the fall elections, writing more than 2,000 letters. This year, they’re exploring how they can encourage inclusion within the community. “Our constant commitment is inclusion,” said Carolyn. “How can we be inclusive in our Steering Committee and in our community? We want to be sure we reach out to the rest of the world and include other people in our thoughts and concerns.”

Recently, the group has reached out to residents to help secure donations of clothing and personal items for Afghan refugees who are being resettled in San Diego. Estelle Ebert, a member of the group, said “While some efforts are focused on learning, something can stir us to take action, as in the case of the Afghan refugees.”

CSMAD also encourages residents to share their personal stories with others, fostering a sense of connection among residents. “These are real stories,” said Carolyn. “Recently a mixed-race couple at White Sands was generous in sharing how they have experienced racial discrimination. In an upcoming meeting focusing on reproductive rights, residents will tell their stories related to abortion. These stories heighten our awareness and concern.”

The group currently holds monthly Zoom meetings during which speakers have been invited, including the new mayor of San Diego, to speak with residents. The Steering Committee also holds bi-monthly meetings with leaders from other HumanGood communities, including Regents Point in Irvine and Piedmont Gardens in Oakland.