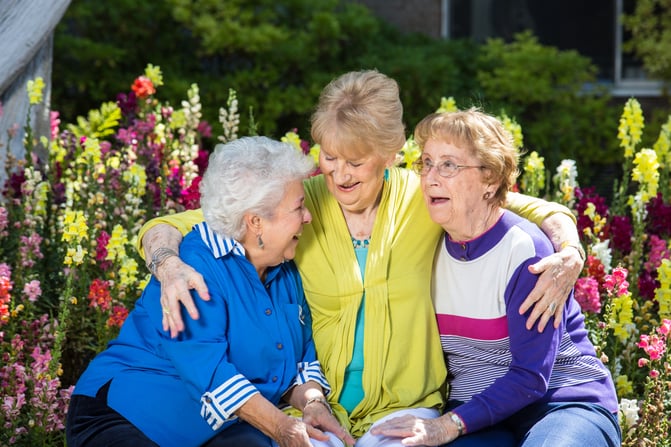 Carole Malinowski, 83, and her husband Lou couldn’t wait to move into their sunny cottage at Windsor, a HumanGood senior living community in Glendale, California. Sure, they knew they’d miss their home of 47 years—the one with the snappy red door—but they wouldn’t miss all those stairs and the never-ending yard work. They couldn’t wait to make new friends and take advantage of the activities at Windsor.

That’s when the worst happened.

With the moving van still in the driveway of their old house, Lou died suddenly. Excitement turned to disbelief and then to grief. Carole had to leave everything familiar behind, go from being part of a couple for more than 60 years to a widow in a new environment—and instantly make arrangements for the funeral.

Dealing with grief is gut-wrenching no matter where a person resides. However, senior living communities can provide built-in support systems and a family-like feel that may lessen residents’ heartache and give adult children peace of mind, knowing that their parent isn’t alone.

“As a pastor, I see people very isolated and alone after a death,” says Carole Lyman, chaplain Regents Point in Irvine, California. “In a senior living community, residents are cherished by staff and friends, and there’s an atmosphere of looking out for your neighbor.”

Loss and Healing In Senior Living

Malinowski found such a caring environment at Windsor. “If I started to cry in the dining room, people would comfort me,” she says. “Everyone helped me so much, I can’t even put it into words.”

It also helped that Malinowski threw herself into a variety of activities at Windsor. She is now vice president of the Residents Association, co-editor of the community newsletter and founder of the Windsor Warblers women’s chorus.

“When a loved one dies and you’re older, there’s a tendency to think, ‘My life is over,’” says Dr. Robert Puff, a clinical psychologist in Newport Beach, California. “But that’s only true if you make it true.”

Puff’s grandmother was living in a retirement home when her husband died. To move forward, she reached out to the other female residents, tried exercises like tai chi, volunteered and attended group outings.

For many, the monthly HumanGood grief support group called Transitions also has been helpful. “Even though residents are in different stages of grief, they meet one another wherever they are in the process,” says Pat Burgoyne, a social worker who runs the Transitions group at Regents Point. “They build trust and relationships and feel safe to say whatever is on their minds.”

The group isn’t limited to people who have experienced the death of a loved one but is open to anyone mourning a loss.

In 2009, Jim LeMay and his wife, Mary, moved to a one-bedroom home in residential living at Regents Point. Eighteen months later, Mary was diagnosed with dementia. Neighbors would find her wandering the corridors and gently bring her home. Burgoyne invited Jim to join Transitions. He remained in the group as Mary moved to memory support and then to skilled nursing before her passing in 2013.

“In the support group, we would bare our souls and discuss our grief openly,” LeMay says. “That openness was incredibly helpful to me.”

Malinowski also appreciates her rich, albeit changed, life. Naturally, she is heartbroken that her husband never had a chance to join her at Windsor. But she is deeply engaged in the community and says she can see how far she’s come since that first, fateful day.

Are you noticing that your caregiving obligations are filling up more and more of your calendar and to-do list? If you have found yourself drowning in both professional and family responsibilities, you aren’t alone. In fact, many adults are in the middle ...

Alzheimer’s and other forms of long-term memory loss don’t just impact the person experiencing memory loss—they can change family relationships. For adult children, it can be especially difficult to cope as the disease progresses.

If you’re one of the many people trying to help a parent find a senior living community, the internet is an obvious place to start.