Royal Oaks resident Ken Mallory was supposed to be heading to Dodger Stadium this past weekend for a deserving moment—to be honored as the Dodgers’ Military Hero of the Game. 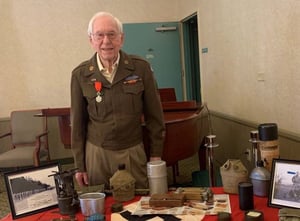 Unfortunately, last Saturday’s game and honorary ceremony were cancelled due to the current public health crisis.

“You’re looking forward to it … then this (coronavirus) comes along and … boom,” Ken told Los Angeles Times’ columnist Bill Plaschke who took it upon himself to honor Ken in his sports column published April 15.

The Military Hero of the Game ceremony is a meaningful nightly tradition that happens during the second inning of a Dodgers’ home game. Ken would have been escorted on the field before fans and thanked for his service as a World War II veteran.  In the excitement, Ken purchased 15 tickets for his family and had planned to wear the uniform he wore while serving as an Army sergeant in both the Pacific and European theaters.

“It was a big game, a big crowd, the perfect time to honor my father,” said Jim, Ken’s son.

While Ken wasn’t able to celebrate at Dodger Stadium, he’s honored in Plaschke’s column. Click here to read the column on Ken’s story and his three-year stint in the Army that included fighting under General George Patton in the Battle of the Bulge.